that last post was intended as my first exercise, painting skin. i've drawn up a list of additional exercises that target weaknesses in my conceptualization, technical skill, etc. i may or may not tackle them in this order:

1 - painting skin (which i will come back to later)
2 - collage (various types, including a juxtaposition
of disparate elements in a single drawing, and
the more typical "ransom note" look)
3 - cloth
4 - "soft" rendering (classical or airbrush rendering,
as opposed to the "splotch" rendering of jimmy)
5 - white on white
6 - fully rendered, photo-realistic animal
7 - incorporating graphic elements, borders, type
(my so-far failure here is embarassing,
since some of my greatest influences in-
clude art nouveau and medieval manuscripts,
which heavily intersperse art and design
elements. not to mention influences like
russian agitprop posters, chris ware, and
great books i have on thai graphic design
and old chinese firecracker graphics)
8 - black & white drawing on brown paper (it
sounds stupid, but i've wanted to do this
since my clooege days, can't understand why
i never got around to it)
9 - building up a sketch with blue & red pencils,
before finishing with black pencil or graphite
(again, i always see animators do this and i love
it, so here it comes!)
10 - monochrome tint, and/or autochrome look
(i love autochromes, too, always looking for
an excuse to try something and here's my
excuse. if you're unfamiliar with autochromes:
http://www.iphotocentral.com/showcase/showcase_view.php/62/1/0

there are a few more, but this is enough to be getting on, for now.

there are also projects. projects are explicitly finished art, and the hows and whys are secondary to the overall success of the piece. several of these are assignments i was given in college. i ether particularly enjoyed them, or horribly failed them (or both), and it seemed a good idea to revisit them:

1 - album cover
2 - book cover
3 - four elements
4 - tarot card
5 - dream
6 - sports (i hate drawing anything
sports related, so this seemed a
great way to kick myself in the teeth)
7 - editorial (i had a very narrow and
unsuccessful grasp on the full range
of crazy things this project provdes
when i was in college... i thought
editorial = caricature of newt gingich.
not this time, baby!)

of course, being the lazy and/or enterprising fellow that i am, some exercises and projects will overlap. for example, i might do an editorial about the evils of black market cloth smuggling, all drawn in black and white on brown paper. woohoo!

here is an initial sketch for project#1, cd cover. in college, i chose "the lamb lies down on broadway", which is one of the albums that most influenced my art, in addition to being an incredibly bizarre and art-inducing album. (by crazy old-school genesis, in case i forgot to mention that part.)
my college pic (which is mercifully awol) was all right conceptually -- a white face, eyes wideopen and all manner of serpents, flies, butterflies, salamanders, and roots pouring out of the mouth. but looking back, i don't think i attempted to draw the face in any particular vein; it was not structured or rendered realistically, it was not graphically flattened, or scratchily abstracted, or anything else worthwhile. it was just there. ditto for the flora and fauna.
so i decided to revisit this creepy concept album, putting a little more pep in my composition, and trying to incorporate more of the countless crazy elements of the story. 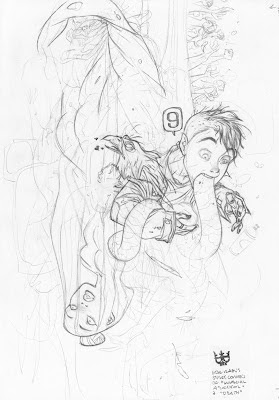 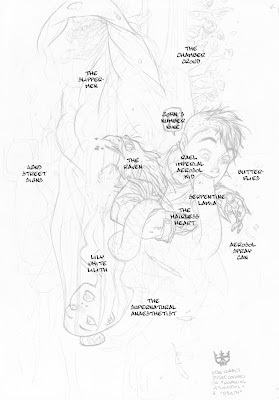 on a nerd note: since i am my own client, i took certain liberties. 1) the album was released, and set, in 1974, but since the specific date is subordinate to the timeless otherworld which our hero rael wanders, i modernized everything. i'm not trying create a retro vibe or historical romance or the like, so i don't want to distract viewers with unecessary specificity. 2) the hero rael is a kid, but since he has sex with various characters and creatures in the story, he should probably look older. but i wanted to emphasize his vulnerabity and unformed condition. 3) upside-down lilywhite lilith is, in fact, supposed to be a middle-aged woman. too bad that's not in the songs, and i only read it in a recent interview, after i started the sketch. i like her as is, and since i'm the client, i've decided to sign off on my own decision.

i love the raven, but i'm not sold on his placement in the grand scheme. i'm also planning on working in various type elements, as well as graffiti of some sort.
Posted by ben c at 10:06 PM 4 comments:

it's been a crazy winter for me, crazier than my usual craziness. among other things, i've been reflecting a lot on my life and career (such as it is).

one of the things that really bothers me is how rarely i've taken advantage of opportunities in my life, how many chances for this or that i've thrown away for one reason or another. this is true of my life in general, but you don't need to hear about that. it applies even more directly to my art.

i'm not stupid, i'm perfectly aware that i am an above-average cartooninst. but the fact remains that, through a variety of projects for all sorts of clients, (most of whom gave me wide creative latitude), i've rarely measured up to my artistic potential. anyone who's seen my sketchbooks knows that they are far better than any of my books or covers. but sketches only show the potential of art. hearing that you have "lots of potential" from your fourth-grade art teacher is great, but at the age of 34, i feel that i should have realized that potential by now!

looking back at the work i did in high school and college, i was much more adventurous, mixing sculpture and graphics and all sorts of other fun things. the results were usually dreadful, especially since i was very technically limited in painting, but at least it was interesting. years of working on very specific projects like "dare!" has definitely led my down a literal path.

i've not only abandoned ideas and techniques that i once used, i've also abandoned -- or at least failed to incorporate -- some of my most powerful influences, probably because they didn't directly apply to the cartoon work at hand. while eyvind earle and don bluth are fantastic, i've never followed up on influences like matt mahurin, sue coe, ben shahn, or modigliani, not to mention russian propaganda posters, japanese woodblock prints, nouveau posters, or figure painters like lucian freud. i've also abandoned conceptual work, everything i do is either character design or scene illustration -- the most unconventional composition i've done in years is the cover to JLU #4... which certainly isn't saying much!

so in my haha spare time, i'm trying to reclaim a bit of artistic sanity by pushing myself to try (or retry) things i should have done long ago. i have made up a list of specific study assignments and projects i will attempt over the next year. hopefully i can build up a portfolio of new art that appeals to a broader range of artistic demands (and even push my "cartoony" work much further), but if nothing else, it will be a challenge.


anyway, here is my first study, "skin". now there are 3 ways to paint a person: concentrate on the light source and ambience, as the impressionists did, focus on structure by using light/dark and cool/warm to "carve out" the figure, and luminence --
actually concentrating on the skin itself, with its translucence, blotches etc. of course, you can use all 3 approaches in a single painting, but in all things there is an order, so one of them has to dominate. i usually concentrate on light (which is how i was taught at college), but for a decade i've been jealous of the luminous skin painted by masters like lucian freud. so this was a first attempt at luminous skin, using an old, semi-"realistic" sketch. no filters or brush tricks, just a PSD paintbrush, set alternately at 33%, 66%, or 100% opacity: 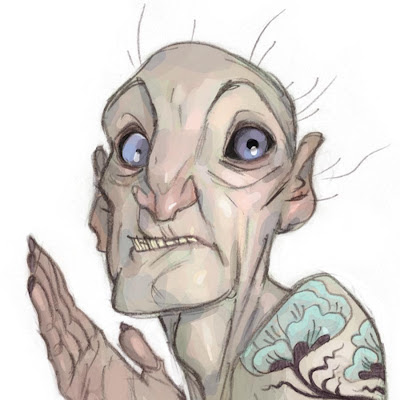 there are a few more skin studies i would like to tackle, but since i have very limited time, i will probably take a stab at some other studies first. but wait...

i liked how the painting turned out, it seemed a waste not to do anything with it. so i decided to turn it into a more fully developed illustration, inspired by the title that originally popped into my head: "jimmy nosferatu, last of the undead tattoo kings".

it gave me a chance to incorporate some of my old influences and approaches into a freud-based figure painting: tattoos, of course, have always been a part of my work, even maria sports tats! although (like everything else) they usually appear more as parts of a character design, not as part of an actual illustration. and i'm no stranger to traditional and modern japanese graphics, having fed on both as a kid. (although i obviously didn't kill myself trying to replicate an exact style -- why do what anyone could do with a little photo reference?) i also had fun playing with off-registering the graphics, a trick i employed all the time in college, using -- gasp!!! -- xerox copies and tape. and the turquoise is compliments of mughal art, where it (and mint green) are always used to great effect to highlight forms. so... 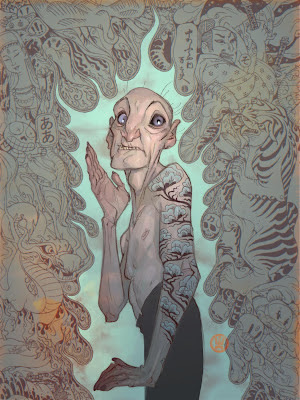