i THINK it is finished... 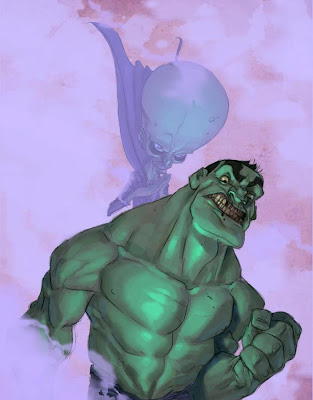 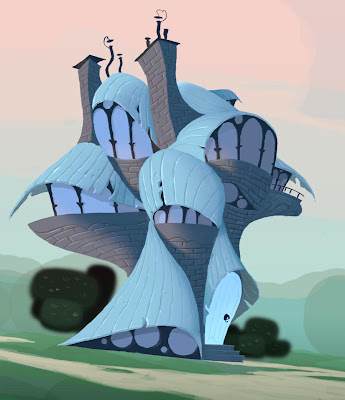 for "oz". i painted several houses separately, now i'm doing the bkg. one trick with the oz scenes is that they obviously have to be vibrant, but i don't want them looking too candy-coated, especially since it will be hard enough to overcome the "cutesy" stigma of the movie.
something else i want to show is that oz is very much lived in. for example, the munchkins have been ruled by a wicked witch for years, and assuming their definition of "wicked witch" is more or less the same as mine, their lands must be in pretty roughe shape. so i wanted a balance between jewel-like beauty and a certain sense of neglect. the tinman's shack provides a similar opportunity, as does the logo on his jacket. these have little visual flourishes that both show how exotic oz is, and how comfortable its denizens have made themselves.

ps - each quarter of oz is associated with a certain race and color (and witch). hence, the eastern witch rules the munchkins in their blue houses, etc. oddly enough, the civilization in "the bones of kyres" has a cardinal-compass cosmology which is similar.
Posted by ben c at 11:05 PM 4 comments: 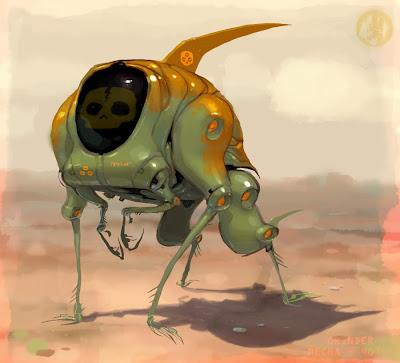 being a nerd, i've actually put ridiculously huge amounts of time into working out structural and functional junk, trying to redesign the wheel, i suppose. in my foolish youth, i would just design whatever looked cool; unfortunately, over the years i've become obsessed with trying to think beyond that, into the core needs and functions of machines i design. (or more precisely, first i try to think of what RESULTS would be best called for in a given situation, then work backwards towards the basic design that could achieve those results, then what sort of technology would be necessary to make the design workable.) which is why it has such scrawny and uncool bug legs, for example. fortunately, i don't have the energy to type it all out, which means you don't have to waste your time reading it!

because i'm all about you.

in recent cleanups, i've found lots of old (and bad) art, including this hot little number. a painting for my college thesis, for some reason i made the cranium super-small. weird. anyway, this is a character from that world thingie. i used a photo of myself as the model, because i couldn't afford to pay anyone, and i can look at myself for reference anytime i want. (so you'd think i would know what my own, shiny-domed cranium would look like... sigh.) 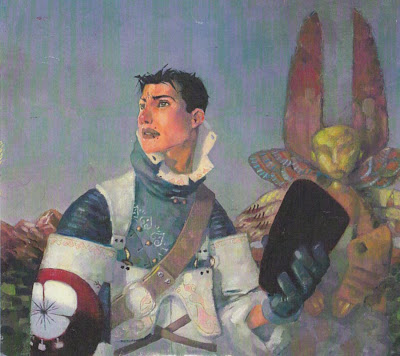 anyway, the basic colors, especially for the face, were nice, but i never liked the background or costume. so i slapped a little color over the face, a quick (45min) bit of relaxation. i love to paint, i wish i had more time... 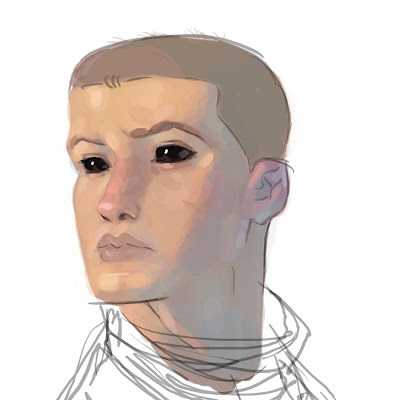 (i wasn't trying to make the new one look particularly like me, and i can assure you that i am much fatter, uglier, and balder than either pic.)
Posted by ben c at 10:36 PM No comments:

more of the same... quick color sketch; idea for main page of kyres site, lettering that reflects (one of the various) "authentic" font style. also example of advertising/label art, for one of the essays. the creature is a minno samrin, a sort of spirit that sucks up negative energy and blows out good luck. (hence the coins he is also carrying.) this is what happens when your computer is taking forever to backup real "work" files. well, backup is done, back to my job! 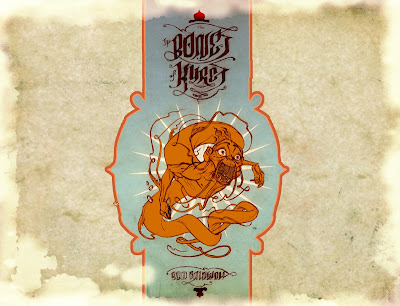 below i posted an art-nouveauish pic of "number one glory girl empress blue". i mentioned that this was a revised version of an older piece (which was itself based on sketches from college) i did for a drawingboard.org auction. here is the older version, with type inserted: 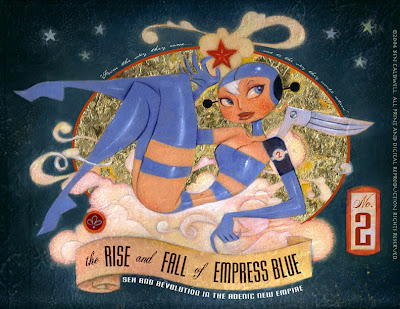 holy crap! digging up that image, i accidentally found this one, from my college thesis. yikes! in my defense, with both of these i was trying to suggest an art style different from modern illustration, but still... they are pretty terrible. that is why some of my newer pieces (like the new blue post below) have all the content, iconography, subject matter etc of the older work, but in a more familiar illustrative style.

it's depressing how bad both my painting and photoshop skills were. yeesh. 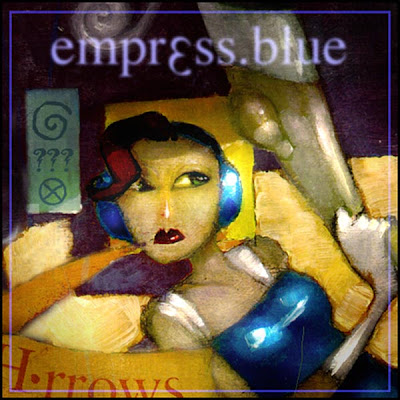 saw this (more or less) this morning,
kinda' creeped me out. took about
15 minutes to "sketch" it. background
colors are all off, but i like the face
and especially the knees: 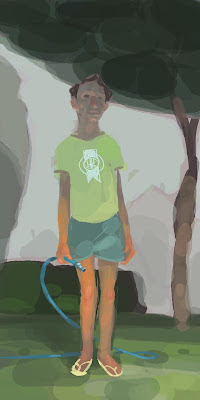 just revisiting my old posts. i realized that,
not only have i rudely failed to reply to your
replies, but i also left out various pics and
comments in the posts themselves!

you'd think that fifth year of college would
have made me smarter...

anyhoo, thanks to everyone for posting! i
really appreciate your comments and support.
frankly, the past year has been very unsettling
for me, especially realizing how short i've fallen
of my own expectations (both professionally
and artistically). boo, hoo.

on the one hand, these little "projects" are a
life line for me, one the other hand, not having
the time (or not being smart enough to figure
out how to MAKE the time, whichever you prefer)
to finish my visual thoughts is frustrating. each
little thing is progressing in teeny steps, and
i'll keep posting them, but the desire to throw
out my entire current art life and start from
scratch is really overwhelming.

wow. i am garrulous AND whiny.

back to the point of this post... adding to a
few incomplete earlier posts:

in january, i posted sketches for my first
"assignment", the CD cover. i was considering
different final treatments for the basic drawing.
one is more fully painted, which will take a while.
another one was this very basic idea, basically
just the sketch, digitally jazzed up. i liked it
because the actual drawing is so interesting,
and this highlights it where a more fully painted
version might obscure it. then again, there's no
excuse why i shouldn't be able to work out some-
thing that sells both the raw drawing and more
realized color/painting treatment. i figure there
is always a solution... it's just the artists job to
figure it out!

so here's the 1st color version: 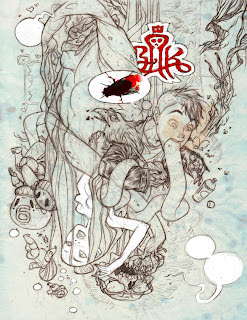 can't wait to get back to it!
(not to mention that hulk pic, and the
kiss pic, and batman/catwoman, etc...)

in march, i was trashing the whitney "modern art"
exhibit. (there were a few good pieces, but they
just highlighted the overall failure of the thing.)
i contrasted the whitney to the MoMA (Museum
of Modern Art).

one of the whitney pieces was several words spelled
out on the wall with lumps of what was presumably
meant to look like shit. literally. but they didn't look
like shit, they looked like lumps of brown play-dough,
which they probably were. i have no idea what the piece
was "about", i didn't see any explanatory blurb. which
is fine by me — it's one thing to have some blurb
explaining the emotional context of a work, or calling
out subtle nuances, that's fine. but if you need a written
crutch just to explain the point of shit names on the
wall, you should probably stop being a lazy and pre-
tentious goof.

MEANWHILE, BACK AT THE MOMA... there is a display
of a small, packaged can from the 1930s. the label is
in italian, but the placard translates the label as "100%
artist's shit". guess what the medium is? that's right...
can, paper label, and artist's shit. maybe you like it,
maybe you hate it, but you definitely have a reaction!
and (assuming you can read italian) the art is completely
self-explanatory — at least, when an artist proudly
packages and displays his own shit in a museum, you
can at least guess what he's saying... about art, about
artists, about museums, whatever.

this is something i've been working on a long time.
so long that i don't even have the urge to write
something "witty" about how long it has been.

anyway, my college thesis was an series of illustrated
essays about a fictional civilization (even then, i'd been
working on it for a lon -- ah, you get the idea). ever
since then, i've been adding/revising to what is now
an impressive pile of crappy scribbles.

i had dreamed, like some jacob reclining on a stone
pillow, to greater things... perhaps some pretty art book?
or a fancy website? all dedicated to my self-indulgent
doodles. but the time has never come -- perhaps it never
will -- and enough is enough. so i will be piling a bunch
of this junk onto some site, in all of its undiluted and
undigested "glory".

here is a color doodle of an imperial bonds ad, one of
the illustrations for an essay about sex, consumerism,
social revolution and art in the "new empire" period of
my imaginary civilization. i'll post a link to my wonder
site... as soon as i've found/made one!

in my dream-life, i will have a chance to finish this and
a few similar pics, to make as prints. i don't really care
if anyone else buys them, i'd just love an excuse to
hang them on my wall... 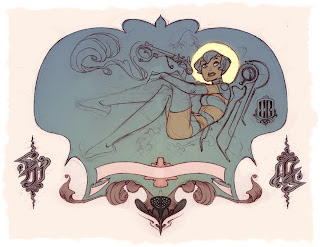 (yes, this is a revised version of the oil painting i did
several years ago for a drawingboard.org fundraiser.
which was itself a revis -- ah, forget it.)

here is a sneak peek at "the wizard of oz".
okay, it's a very small sneak peek. anyways,
i love landscape painting, i could do it all
day. well, almost all day... i'd probably want
to sleep on occasion.